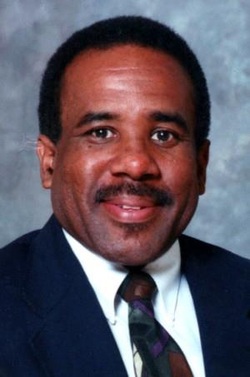 Look below to find out how to contribute to the Ronald J. Sarjeant Symphonic Sounds Foundation.

Mr. Ronald Sarjeant became the South Carolina State University Director of Bands in 1976, and served in this capacity until 2004. Under his leadership The Marching, Symphonic and Jazz bands appeared and performed at many conferences, NFL football games, parades, as well as community and university events. He left to begin his journey with the Lord on July 22, 2012 at 4:50 p.m.

For 34 years, "Sarje," as he is affectionately known, used the lessons he learned as a student under the tutelage of Brother Dr. William P. Foster at Florida A & M University to create a style that would make him a legend. Upon graduation in 1970, Mr. Sarjeant became the Assistant Director of Bands at Tuskegee University and later became Director of Bands. While at Tuskegee, Mr. Sarjeant had the pleasure of serving as band director and mentor to a group of young men who would become some of the most revered entertainers in music.

In 1976, Mr. Sarjeant left Tuskegee to become the Director of Bands at South Carolina State University (SCSU) where he served for 28 years until his retirement in June 2004. With innovations such as the four corners, big band, and the diagonal march right (DMR); Mr. Sarjeant developed the SCSU "Marching 101" Band into one of the top marching band programs in the country.

Mr. Sarjeant has held offices in several organizations and received many honors and awards. Among them are: State Chairman of the College Band Directors National Association, District Governor for Kappa Kappa Psi National Honorary Band Fraternity, featured on the Wall of Distinction at Florida A&M University, which recognizes outstanding graduates of the Department of Music, Named as one the Integration Pioneers at Florida State University, Served as Advisor to Kappa Kappa Psi National Honorary Band Fraternity and Tau Beta Sigma National Honorary Band Sorority, recipient of recognition of his service to the Charleston community by proclamation from the Mayor of Charleston, SC, proclaiming September 14, 2003, as Ronald J. Sarjeant Day in Charleston, and Honorary Director of Bands-Honda Battle of the Bands.  For his work with the SCSU Band and community, he was inducted into the SCSU Athletic Hall of Fame.


​Alumni Supporters and Friends of the Marching 101 Band! Please join the SC State Marching 101 Rubber Fan Club!
“R-U-B-B-E-R F-A-N-S...The Rubber Fans and the 101!”
When the band chants the words above, it’s to acknowledge the followers that love and support it.  We have created something just for the SUPPORTERS of the  Marching 101 and the University Band Program.  We are “The Best Band in the Land” and we definitely have the BEST FANS!  We want to make sure that the Marching 101 Band has what it needs to continue to provide show-stopping
performances that will promote recruitment.  These funds will be used in the following areas: scholarships, instruments, uniforms, and other areas of need.  To show your love and support, please join the MARCHING 101 RUBBER FAN CLUB.  All proceeds are tax deductible and will go directly to the SC State Marching 101 Band.
Proudly powered by Weebly